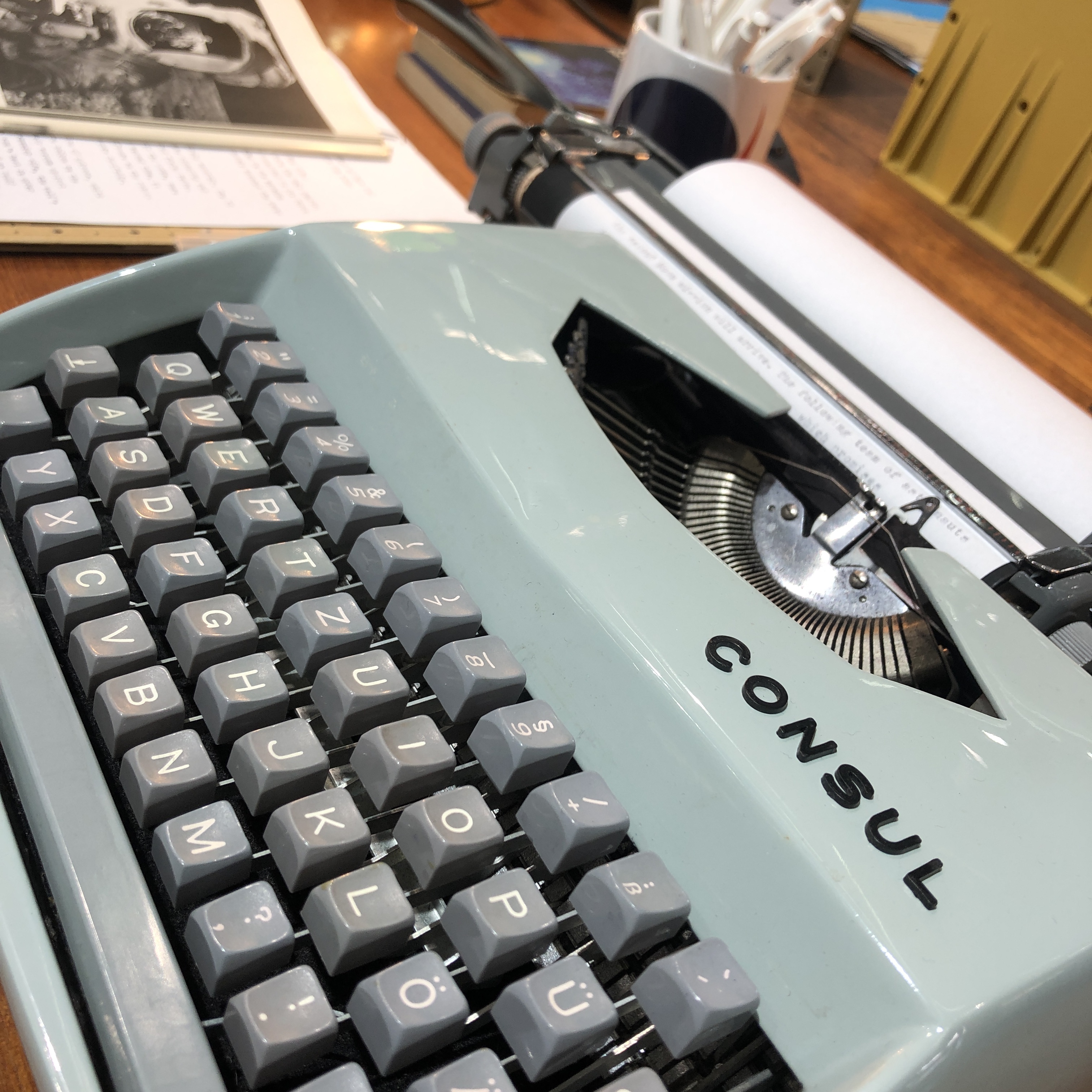 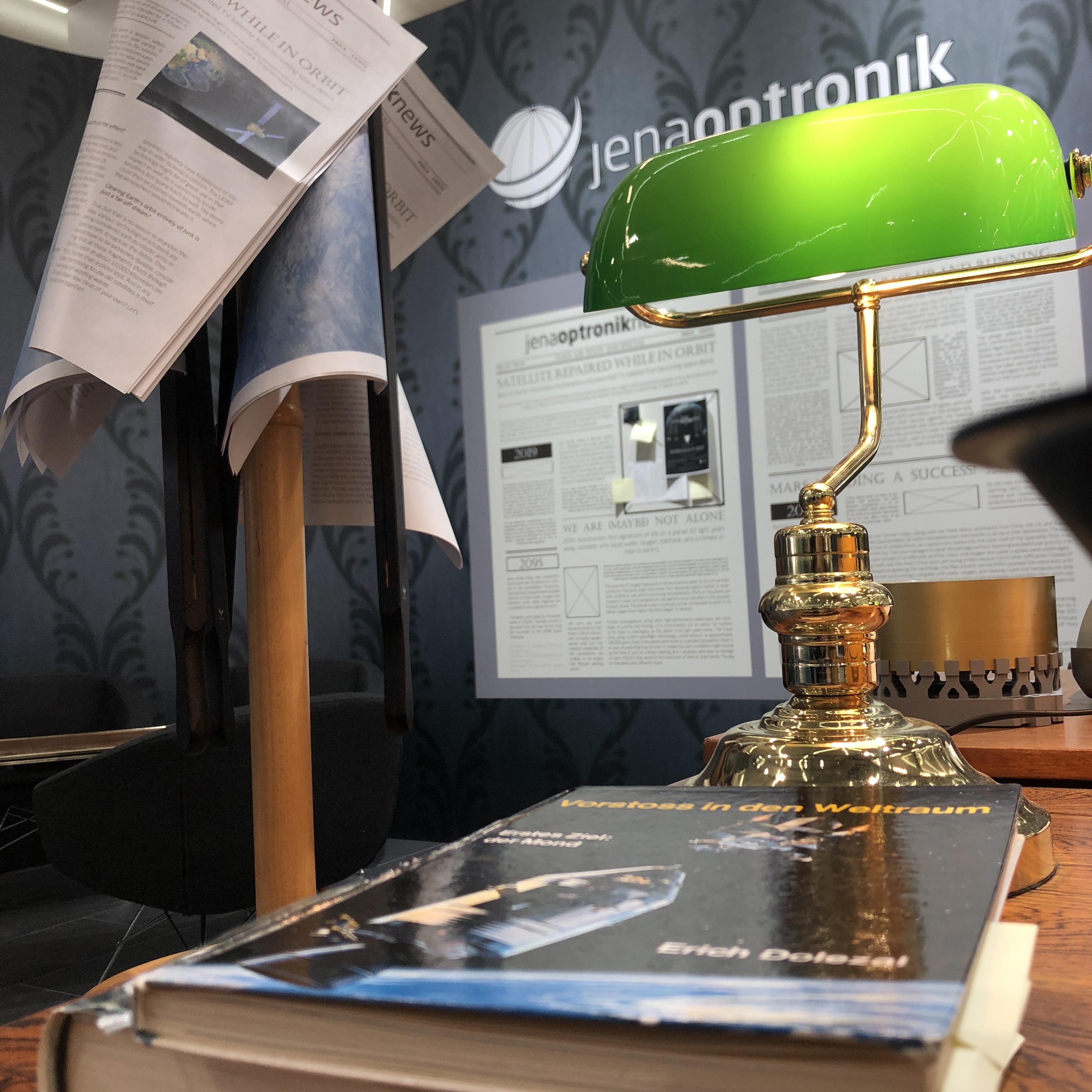 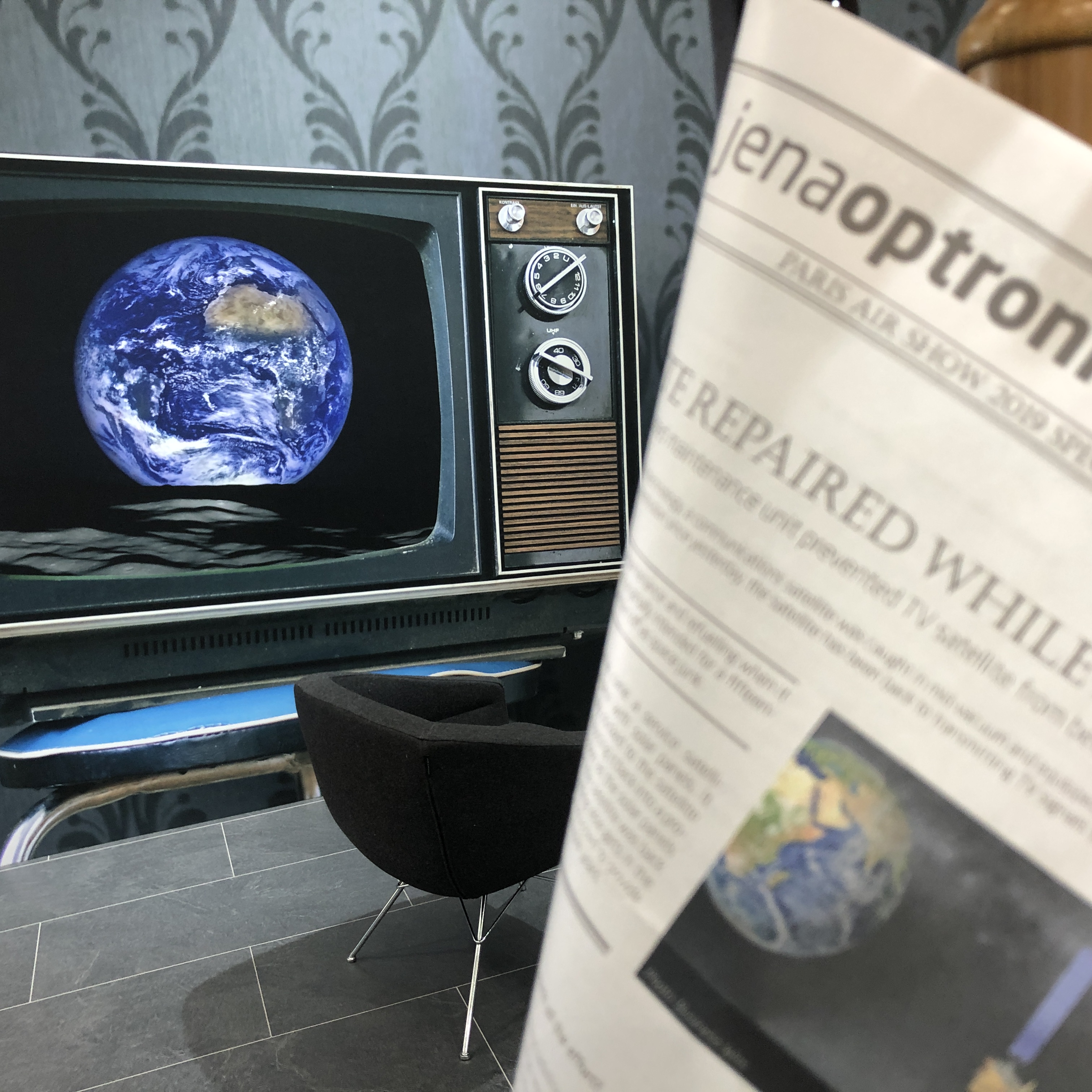 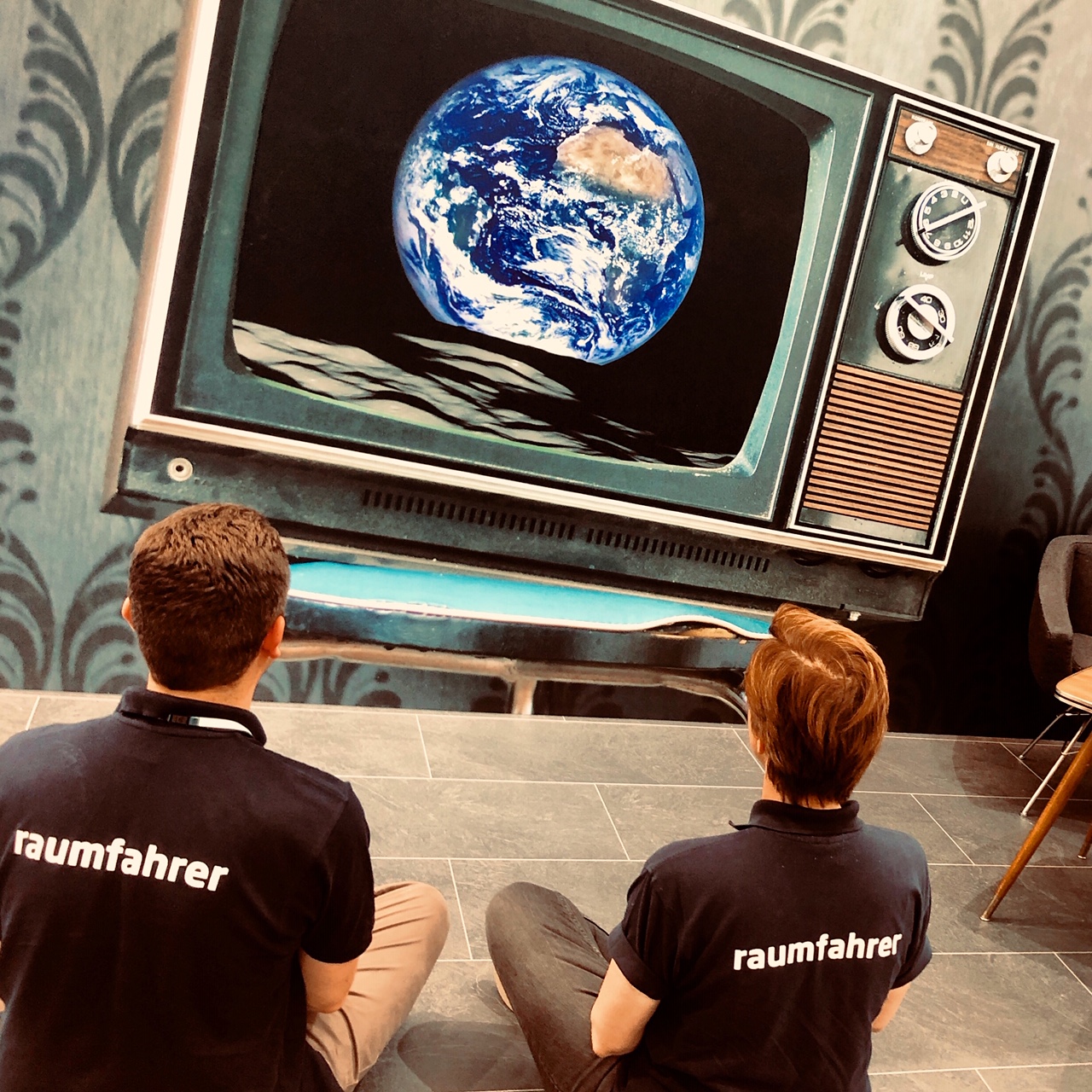 Journalists - like millions of viewers - explore the fascination of space by watching the moon landing.

During the Paris Air Show we go on a time travel and will share the stories with you here: When will the next human make a step on the moon? When are we going to reach mars? Is there an earthlike planet somewhere?

2019: Satellite repaired while in orbit

For the first time in the history of space technology, a communications satellite was caught in mid-vacuum and equipped with a new propulsion and energy unit. Back in commission since yesterday, the satellite has been back to transmitting TV signals to the earth.

There were no plans for the Tilly satellite’s maintenance and refuelling when it went into geostationary orbit in 2001. It was originally intended for a fifteen-year lifespan, after which it was going to be written off as space junk.

But along came a service satellite – complete with solar panels. It automatically docked to the satellite yesterday, thrusting it back into a proper orbit. As soon as the solar panels were deployed, the satellite was back on air. And if nothing else gets in the way, Tilly is now equipped to provide service for several more years.

Igloos built of Moon dust constructed in a matter of days and committed to their first inhabitants / Next mission step: Preparing the ground for radio telescope

This house-warming party was reserved to very few VIPs: Due to the cumbersome journey , six astronauts were the only guests. Meanwhile, as the Moon Station LunaSearch was committed to its first inhabitants, champagne corks were popping in the Mission Control Center on Earth as well. Millions of people watched the event live via television and the internet.

The construction works did not run entirely smoothly. The 3D printing process, using moon dust for microwave sintering and contour crafting, jammed and required fixing twice. Both times the astronauts were able to repair the works, once going on an extensive outdoor mission. The second time, it proved to be sufficient to manipulate the software so the robots would perform their automated construction work dutifully.

The Moon base building looks like a collection of igloos, with wall structures built up in layers which are hollow on the shadier side, shielding the station with their vacuum against the freezing temperatures of space. On the sunnier side, the wall’s solid construction is meant to absorb the sun’s heat in order to keep it warm and cosy inside. The Moon dust, used as building material, was melted at contact points to sinter them brick-like. Solar energy was used for the process.

The design reflects the sustainability commitment of the European Space Agency (ESA), aiming to preferably use materials indigenous to the respective celestial body. Water supply has been secured as robotic vehicles managed to retain ice from craters on the lunar surface.

With the construction work completed, the crew will continue preparations necessary to build the super telescope on the far side of the moon. In six months, the astronauts from Russia, China, the US, France, Japan and India are due to be relieved, as the second moon mission will arrive. The following team of astronauts is scheduled to set up the radio telescope, which promises unprecedented insights into the depths of the universe free of atmospheric disturbances.

By the way, the menu at the house warming party consisted of moon cheese and crackers served with small bottles of Armenian cognac.

Astronaut Anneliese Modi: "We can reach for the stars"

For more than half a year, people all over earth have been eagerly anticipating the Mars landing. The four astronauts on the mission have gone further out into space than any human beings before them. Today will indeed go down in history, as Astronaut Anneliese Modi became the first person ever to set foot on the red planet. With a seven-minute delay, her radio message reached earth: "If we humans succeed in working together for our mutual benefit," she commented on that giant leap for humankind, "we can reach for the stars and discover new horizons."

The 57-year-old German-Indian, along with her three fellow astronauts from China, the US, and Russia, have travelled approximately 56 million kilometres over nine months to arrive at their destination. The journey was not free of complications, as a space rock crashed into the outer shell of the Spaceship Orion two months into the trip. The crew managed to repair the damage without requiring extravehicular activity; the emergency plan proved to be effective, and the crew’s vital oxygen and water supplies were undamaged.

The landing itself was the most critical point yet during a Mars mission full of other difficulties. Instead of a Martian delegation greeting the earthlings, the Mars Ascent Vehicle (MAV) received the astronauts with its air-conditioned surroundings, complete with water, oxygen, and heating. Given that temperatures drop to -85 degrees in the Martian night, climatization is a matter of life and death. During Mars days, which last just half an hour longer than Earth days, temperatures rise to up to 20 degrees Celsius in the equatorial part of the planet, where the crew has landed.

The robotic MAV already reached Mars during a preparatory mission two years ago and has been extracting fuel and oxygen from the Martian atmosphere ever since. The MAV is crucial to the manned mission as it not only houses the astronauts on the planet but is also there to bring them back to the Orion after 500 days. The spaceship is now in orbit around Mars, awaiting the return flight, all while the MAV continues to produce methane and oxygen, not only to keep the astronauts alive, but ultimately to lift off from the planet again.

The crew, in the meantime, will be exploring the red planet, with an emphasis on searching for current or past life. The MAV will be set to take off for the return flight when Earth and Mars are again in alignment. This will be the first time a human spacecraft has ever been launched from another planet.

Astronomers find signatures of life on a planet 42 light years away, complete with liquid water, oxygen, methane, and a climate similar to earth’s

News broke today that researchers found earth-like conditions on a planet in the constellation Ophiuchus. Spectroscopic analyses have revealed deposits of liquid water, oxygen, and methane, which taken together are considered to be a signature of life. The planet, which goes by the poetic name of HDJD37, revolves around a red dwarf star, and was found using the successor to the WEBB Space Telescope.

"We can’t say with absolute certainty that there is life on the planet," a mission spokesperson said, "but the chemical properties of the atmosphere are unlikely to be explained through geology alone."

The amounts of oxygen measured in the atmosphere seem to hint at earthlike conditions. Methane, a gas that arises from decaying organic matter in anaerobic conditions, was also found during the exploration. Parts of the planet are covered in water, and temperature calculations have indicated a mild, possibly tropical climate. The planet is also volcanically active, comparable to earth in its earlier stages when higher life forms began to develop.

Further investigations, using other high-performance telescopes, are scheduled to confirm the findings. It is unfortunately not an option for humans to fly there to investigate, as the planet is 42 light years away. The travel time, using current spaceflight technology, would amount to approximately 180,000 years. Even if the planet were home to a sentient population, there is no way of predicting how far their or indeed our own civilization might evolve by the time of such an unlikely meeting. But if anybody were ever to manage to reach HDJD37, they would in fact have a lot of time on their hands: The day on the planet lasts 38 earth hours.